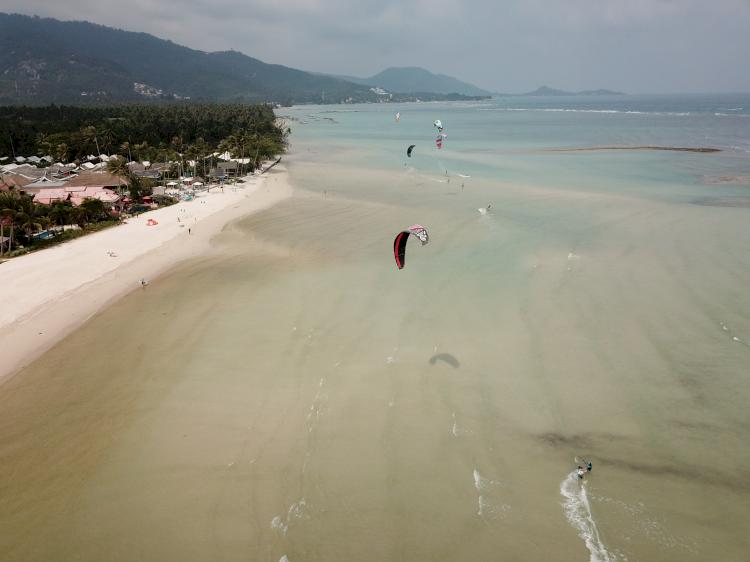 Asia isn’t a destination that automatically springs to mind as a kiteboarding mecca, but with its warm waters and seasonal winds, Thailand and its surrounding countries boast some ideal spots to learn this exciting sport.  Kiteboarding is relatively new in its current form and combines aspects from other thrilling sports: wakeboarding, skateboarding, sailing, surfing, paragliding, windsurfing and snowboarding.

Kites have a long and somewhat mystical heritage, though the exact origin is unknown.  They are thought to have traversed our skies for over 2000 years and originally constructed from beautiful silks and bamboo.  The first written record of a kite flight was in 200BC during the Han Dynasty in China: an army general flew a kite into the rival army’s territory to measure the distance required to build a tunnel to get past their defences.  Kites were used for other military purposes such as signalling and messaging during the Mongol period. Across the centuries, kites have spread throughout Asia and have been used in religious ceremonies by Japanese monks, to ward away unseen evil and bring good fortune during harvests, as toys for children and in scientific experiments.

In the 1800s George Pollock used kites to propel carriages on land and ships across the water.  These kites were flown for sustained periods to replace horsepower with kite-power; thus negating costly horse taxes that were levied at this time.  Early in the next century, Samuel Cody developed a kite that could lift a man: he succeeded in crossing the English Channel in a small collapsible boat powered by a kite.

Fast forward to the late 1970’s and brothers Bruno and Dominique Legaignoux, from the Atlantic coast of France, developed kites for kitesurfing and patented an inflatable kite design in 1984.  This design is still in use today.  The evolution of extreme sports continued to gain momentum, and in 2000, Red Bull sponsored a new freestyle competition in Maui – Red Bull King of the Air; this contest judged riders on style, versatility and height.  This annual competition is held in South Africa and grows in popularity every year.

KBA (Kiteboarding Asia) were the first kiting pioneers to establish schools in Asia; their first centre was in Hua Hin in 2001.  They now operate many kite schools across Thailand and have successfully trained over 10,000 students, and 100 kitesurf instructors.  Jane Kask, centre manager on the beautiful island of Koh Samui, gives an overview of why Thailand is one of the best destinations in the region to learn how to kitesurf.

“With almost two decades of experience and passionate teaching, KBA has established over 10 schools in seven locales on beachfront’s across Thailand.  Numerous centres give students and accomplished kiters the ability to follow winds across different shores of the country, yet they can still expect the same high standards where ever they travel.  Kiteboarding is extreme and having so many areas to visit always leads to an adventure, sometimes along paths that are less travelled by typical tourists seeking sheltered beaches.  Hua Hin is a thriving town just a few hours from the capital city Bangkok and is the gateway to the spectacular southern islands of Phuket and Koh Samui.

Each kitesurfing school is in a pristine and unique destination, and adventure seekers will experience some virtually undiscovered locations which are sometimes off the beaten track.  The Phuket school based in the northern part of the island which is a far cry from the busy bars and nightlife of the south: surrounded by a protected national park, it gives more experienced kitesurfers the opportunity of riding waves on the Andaman Sea.

Koh Samui is fondly known as coconut island and has a relaxed village vibe that boasts almost deserted beaches, shallow waters and the softest white sandy beaches.  There are two seasonal schools on the island, so surfers have the best chance of wind.  Highly experienced instructors and the clement weather conditions make Samui the ideal destination to discover a new and exciting sport in a safe environment”.

The hidden paradise of Myanmar – Is it ready for the world?